On August 31st, a friend of mine posted the question ~ Who has seen Hamilton on Broadway?  Well, this is the HOTTEST show on Broadway right now and it is very difficult to get tickets to see it unless you want to spend a few hundred dollars per seat. A friend of hers posted a response about their niece winning 2 tickets in a “lottery.” I grew up right outside of NYC and absolutely love the theatre, have been to see a lot of shows over my life, and have never heard of a “lottery” for the theatre. There is a place where you can stand in line and get discounted tickets for Broadway shows, and I believe there is an app as well as some other place online to get discounted tickets, but a lottery?  This was new to me and I knew I would love to learn more about it.

On September 2nd, I came up to NYC for a wedding, and my daughter met me so we could spend the weekend together.  Once we made it through the awful traffic, dropped our suitcases off and unpacked what we needed to, we decided to go for a quick snack (approximately 3:30).  I mentioned to her (she had lived in NYC for many years) about the “lottery” for tickets to see shows, and within 5 minutes she had contacted a friend who she knew loved theatre, found the “lottery” and entered for the two of us to see Hamilton that night . I just knew we were going to win – and I told her that. It was just a certainty I felt. Within 15 minutes she got an email and looked at me incredulously and said “We Won two tickets for tonight!”

{Apparently 10,000 people or so enter this lottery every day. From the time a friend posted about it (right before I was due to come up to New York City) and my daughter found the lottery, it was intended for us to go.~ Click Here to Learn More about Trusting The Universe}. 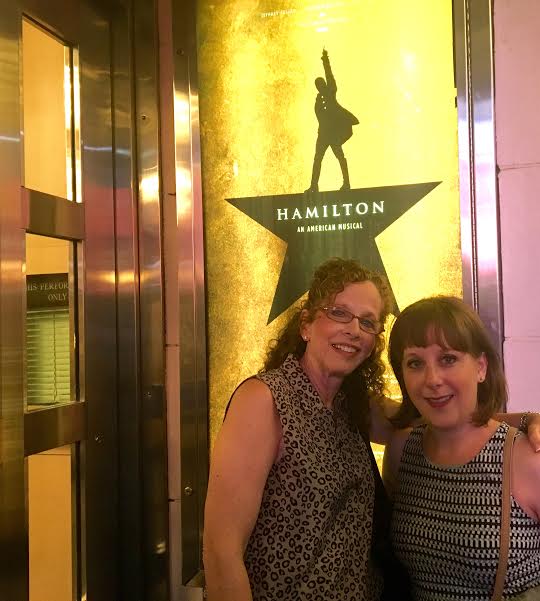 To say we were excited to see Hamilton is an understatement.  It really was a magical night beginning with us getting ready for dinner and the show (I still believe in dressing for theatre), enjoying a delicious dinner together, and then standing in front of the theatre with a couple who had also won tickets for that night. The anticipation was thrilling ~ even the ushers for Hamilton exuded a certain excitement.

So, apparently the lottery winners get front row seats: 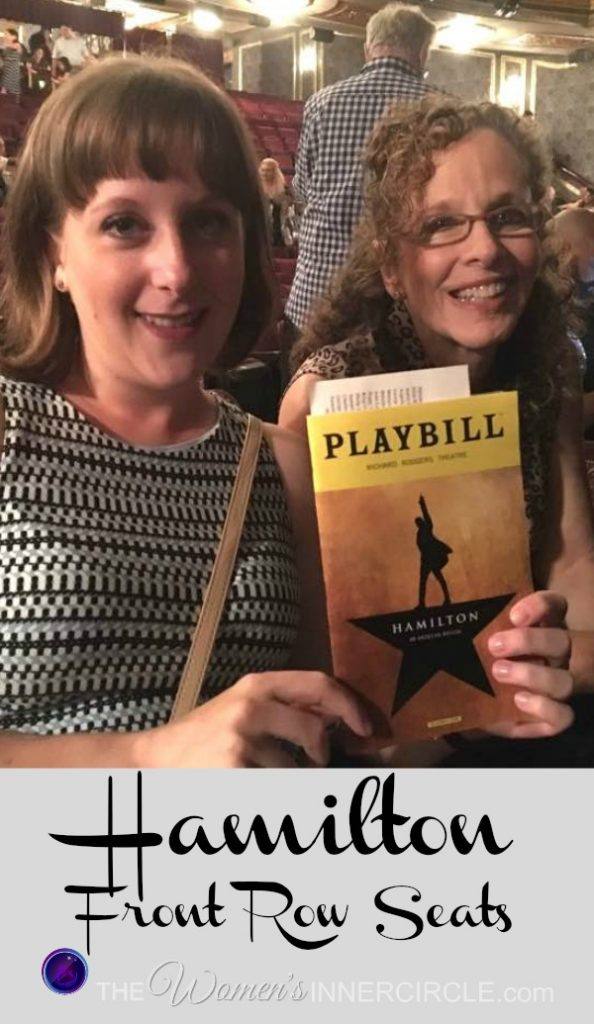 The show itself was An Event (there really are no other words for it), the audience was radiating energy from the second the first actor came on stage. It was a totally different feeling than any other show I have seen (with the exception of Pippin). The story begins and you are immediately immersed into the story of Alexander Hamilton.

The show was ~ Innovative, Educational and Energetic.   In essence, it is a history lesson done in “rap” to tell his story, and how our government was developed. A. Ham (how he signed some of his letters) was such an incredible force behind the development of our government. Because of the way the show was delivered, I will remember things about history that I never would have just from reading about it.  I think this is one of the reasons the show has become so popular, the innovation and entertainment value mixed with a lesson.

Entertaining, Enjoyable, Educational, Captivating, Fun with an Extremely Innovative Mode of Delivery are the words I would use to describe Hamilton. It is a must see show for people of all ages! 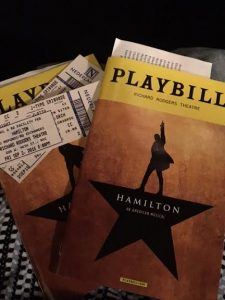